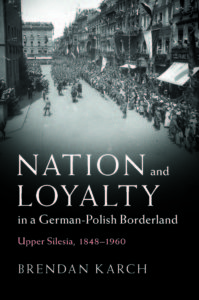 Nation and Loyalty in a German-Polish Borderland: Upper Silesia, 1848-1960 (Cambridge UP, 2018) tells the story of local resistance to nationalization. In the bloody twentieth-century battles over Central Europe’s borderlands, Upper Silesians stand out for resisting pressure to become loyal Germans or Poles. This work traces nationalist activists’ efforts to divide Upper Silesian communities, which were bound by their Catholic faith and bilingualism, into two ‘imagined’ nations. As locals weathered increasing political turmoil and violence in the German-Polish contest over their homeland, many crafted a national ambiguity that allowed them to pass as members of either nation. In prioritizing family, homeland, village, class, or other social ties above national belonging, a majority of Upper Silesians adopted an instrumental stance towards nationalism. The result was a feedback loop between national radicalism and national skepticism.

“Plebiscites and Postwar Legitimacy.” In: Pergher and Payk, Beyond Versailles: Sovereignty, Legitimacy, and the Formation of New Polities after the Great War. Indiana Univ. Press., May 2019 (PDF coming soon)

This work examines the five plebiscites carried out in disputed border regions of Central Europe after World War I. These voting exercises, while limited in their use, became the most tangible democratic exercises over sovereignty after the Great War. As I argue, the plebiscites ultimately revealed the contradictions of drawing nation-state borders in multi-ethnic landscapes. As seen in propaganda and plebiscite results, voters regularly failed to conform to their ethno-linguistic traits, often prioritizing economic well-being or historic ties over national belonging. They failed in their aim of settling border disputes, instead paving the way for national radicalism and revanchism. Thus, the closer one approached the democratic practice of self-determination in central and eastern Europe, the less national self-determination appeared a coherent blueprint for order.

After World War I, a plebiscite and low-level civil war resulted in the partition of formerly Prussian Upper Silesia between Germany and Poland. On the German side of the new border, Polish activists worked to recruit their ethno-linguistic kin (who formed a majority in many rural areas) to the Polish cause, hoping to eventually cede the rest of Upper Silesia to Poland. Shielded by new democratic freedoms and League of Nations minority protections, these Polish activists worked in schools, churches, and electoral politics to nationalize Upper Silesian Polish speakers. But, as I show, they largely failed in their efforts in the 1920s. Most Polish speakers proved wary of national politics after the trauma of the plebiscite period, and were satisfied by new cultural freedoms in education and church language use provided by Weimar democracy. The result was a frustrated Polish movement, which turned by the early 1930s to racialist and illiberal politics that mirrored, in part, the rhetoric of the Nazis.

After the partition of Upper Silesia between Germany and Poland in 1921, both countries agreed to a mutually binding League of Nations minority treaty in the region. The main purpose of this Geneva Accord was to protect Poles who remained in Germany and Germans who stayed in Poland. But the Geneva Accord also included protections for religious minorities, a clause that was not invoked until the Nazis took power in 1933. Suffering anti-Semitic persecution, the roughly 10,000 Jews living in German Upper Silesia used the Geneva Accord to gain a truly exceptional legal status: from 1934-37, all Nazi anti-Semitic laws were declared invalid in the region. Jews held onto their government jobs, their communities received state subsidies, and social exclusion was diminished. This article examines both the successes, and the limits, of this temporary reprieve, and explains why Nazi officials chose to honor these League-backed minority protections.

This article reviews several recent works on Central and East Europe that use a regional or local lens. As I argue, regional studies allow historians to seek out continuities across time and political regimes, and to provincialize the role of nationalist politics. These works under consideration are united by a goal of undermining the teleology of nationalization, instead describing how activists’ efforts to make loyal national citizens were met by apathy, situational ethnicity, or other strategies of deflection or resistance.

For a complete list of publications, please refer to my CV.